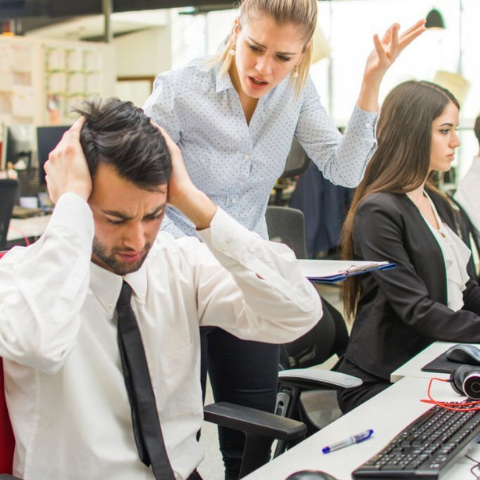 You know these kind of people. They are those who “accuse, threaten, harass, harass, shame, raise their voices, wave their hands and sometimes even use physical force” in the office. They can be people who throw tantrums, overbearing supervisors, micro-managers, passive and hostile colleagues or subordinates – the list is endless.

If you work with a toxic person, you are not alone: ​​a study found that four out of five employees work or have worked with a colleague who could be considered toxic at work. This type of behavior is too often allowed. Only 40% of supervisors think they would fire a toxic employee, while 88% of employees say they would.

Management, on the other hand, should pay particular attention. Research shows that groups capture emotions, and that a member’s bad or good mood has a huge impact on the rest of the group. More so, groups acquire a shared emotional experience, called “group affect”. This means that one spoiled apple can ruin the whole batch.

Toxic people pose a serious threat to a productive and healthy workplace. They have the ability to infect and even affect the mood of an entire team. But what are your options? Are you going to ignore them? Will you confront them? If management turns a blind eye, how can you change their harmful behavior?

Tips for dealing well with toxic people at work

Here are some ideas for you to think about.

1. Don’t get caught up in the drama

When another person is toxic, it’s not you, it’s them. It’s not worth wasting your time or energy worrying about what you’ve done or why you’re being singled out. It only strengthens his hold on you.

You need to distance yourself emotionally from toxic people, writes Larry Kim in Inc. “Stop giving toxic people space in your thoughts. It’s very difficult, but stressing over what another person is doing or might do next sabotages your efforts. You question your actions and weigh their advice even before it is given (or imposed) on you. »

Take a break, laugh with a trusted colleague, or take a few steps back. Don’t get caught up in their drama; it’s not worth losing your temper.

Toxic people, whether it’s your boss, an employee, or a co-worker, act unreasonably in the belief that it will help them achieve a goal. Unreasonable people “often approach situations this way because they think it’s the best way for them to get their point across or avoid being blamed for something…for them, it’s not irrational”. They feel that if they manage to persuade or overwhelm someone, the other person won’t ask them to do something they don’t want to do, or hold them accountable. »

But what are your options for dealing with this senseless behavior? By looking into the situation and finding out what drives them to act the way they do. If you can recognize there is something underneath the way they are behaving, if instead of reacting to them… hold back a bit of yourself.. Let it finish, then pause, bend over what he says and ask him the question in an appropriate tone, that of interrogation, of the desire to know more”. If they sense you’re worried about what’s going on, they’ll be more likely to open up to you.

You need to research the main message they are trying to convey amidst the storm. This is very helpful when trying to communicate with the toxic people you manage.

Engaging in conversation with the person and listening to what is really upsetting them is a fantastic way to get to the root of their toxicity and confront it. “Inside most people who aren’t wool-dyed dysfunctionals, Goulston says, is a desire to achieve better outcomes. You have a chance of avoiding much of the poison if you can tap into that desire.

3. Set clear boundaries for yourself

You have to decide what you will and won’t tolerate at any given time. It’s best to do this with a cool head, when you’re most rational.

Push the limits if your colleague points the finger every time there is a problem. If a colleague is always complaining, draw their attention to finding solutions.

According to Dr. Travis Bradberry, co-author of Emotional Intelligence 2.0, drawing a boundary is essential, especially with people who complain. “Would you sit all afternoon inhaling second-hand smoke if the plaintiff smoked? he writes. You would put some distance between yourself and the complainant, and you should do the same with him. Asking complainants how they plan to resolve the issue is a great way to set boundaries. They will keep the subject quiet or steer it in a more useful direction. »

4. If all else fails, escalate the issue

It’s always best to deal with a toxic co-worker on your own before moving on, but you may not have a choice in some cases. If your suggestions have not worked or if the person is inflicting serious harm on you, you need to escalate the situation. Call HR if you are the manager.

Focus on how this person’s behavior negatively affects the business rather than just saying they’re being tough, because that’s unlikely to result in change. Prepare talking points about how this person affects productivity and bring specific examples with as much supporting evidence as possible.

Make the case for the negative consequences of long-term toxic behavior in the workplace. If left unchecked, a team’s morale can be affected or even irreversibly altered.